How shelters and rescues can treat and talk about obese pets

It's an “epidemic,” says animal trainer Travis Brorsen, a “life-altering scourge affecting over 50 percent of U.S. pets.” Veterinarian Ernie Ward feels similarly, calling it a “medical crisis” that has “transcended cute and funny.”

What is it that’s simultaneously alarming veterinarians and making people giggle? Fat dogs. Fat cats. Dogs so overweight their legs stick out sideways like kebab skewers; cats with stomachs so distended they sway from side to side as they walk, if they walk at all.

These overweight animals aren’t living their best lives, says Brorsen, who hosts the TV show My Big Fat Pet Makeover on Animal Planet. And they’re likely sick or will become so, says Ward, who founded the Association for Pet Obesity Prevention in 2005.

Yet a 2017 study published in the Journal of Comparative Pathology noted that from 2007 to 2011, obesity increased by 37 percent in dogs and 90 percent in cats. “We’re now seeing a preponderance of pets with very severe obesity being relinquished to shelters,” says Ward.

Shelter and rescue workers might scoff at the idea that pet obesity is a serious animal welfare issue, or at least one that animal welfare groups should spend time and energy combating. But while shelters have long seen heartbreaking starvation cases, many are now taking in pets who were left with a self-serve bowl of kibble as their only form of mental and physical enrichment, leading to costly health issues, decreased quality of life and, in some cases, an early death.

Ward says overweight pets may suffer health complications like heart disease and fatty liver, difficulty breathing and moving, skin infections, hypertension, heat sensitivity, digestive issues, and increased pressure on joints that can cause arthritis, torn ligaments, hip dysplasia and slipped disks. Portly dogs and cats may have undiagnosed conditions like diabetes or hypothyroidism. Worst of all, a lifetime study of Labrador retrievers found that even moderately overweight dogs lived around two years fewer than those at a healthy weight.

If you have an obese animal relinquished to your shelter, Ward says, you have an animal who “desperately needs medical care.”

While shelters and rescues should always have a veterinarian rule out underlying health issues, most pets’ excess weight is a result of lifestyle and well-meaning but misguided caretakers, says Brorsen. In a busy, urbanized world, dogs and cats have gone from eating table scraps to eating table scraps, pet food and treats, explains Ward, and they’ve gone from roaming acres of land to napping on the couch.

This is especially true of indoor cats, who are protected from cars, people and other animals but are often understimulated, says behavior manager Lisa Stemcosky at the Humane Rescue Alliance in Washington, D.C. In 2018, Stemcosky was tasked with helping orange tabby Symba—who was surrendered in a produce box because nothing else would fit his 35-pound girth—shed some pounds before going to a new home.

“Symba was an extreme case, but it is not at all abnormal for us to see a cat of 15 to 20 pounds,” she says, which the Association for Pet Obesity Prevention says is equivalent to a 5-foot-4-inch adult woman weighing 218 to 290 pounds. (Each animal should be assessed as an individual using a standard body condition score chart, but the average cat should weigh around 10 pounds.) “This is a sign of us humans not really understanding animal nutrition and the importance of exercise to them.”

At Baltimore Humane Society in Maryland, Wendy Goldband, director of marketing and communications, dreamed up a Phat Cat Fitness Camp, a 12-week weight-loss program that included sessions with a “purr-sonal trainer” and regular weigh-ins, back in 2012. She says that the 14- to 16-pound cats in the “camp” (a community cat room filled with donated cat trees and live broadcasted onto the internet) struggled with most enrichment equipment—overweight dogs and cats often feel too sluggish to enjoy play—but would run for pieces of kibble shot from a treat launcher and hop from tree to tree for food placed on different “branches.”

Whatever it takes, says Stemcosky, “just get them moving” and out of traditional cat kennels, even if it’s just for part of the day or just a few steps. A community cat room is optimal, but a corner of an office outfitted with cat toys or a cat tree will also work, she says. “One step can lead to two steps can lead to three. Next thing you know, they’re going to be moving quicker.”

In Symba’s case, Stemcosky had him waddle on a cat wheel (like a giant hamster wheel) that someone had serendipitously donated to the shelter a few weeks before his surrender. At first, he could barely walk, but a year later, his new owners regularly post videos of him prancing for a cat toy or enjoying supervised outdoor trots, despite his still-considerable girth. (They document his weight loss journey on Facebook page “Symba the tubby tabby.”)

Cats are more likely to be overweight than dogs, but they’re also vulnerable to hepatic lipidosis, a life-threatening condition also known as fatty liver disease that can be triggered by rapid weight loss, says Baltimore Humane Society veterinarian Mary Zink. The risk of developing fatty liver disease means that even an overweight cat may need encouragement to eat if the stress of being in a shelter suppresses her appetite. Zink suggests a prescription diet pet food and notes that there are several prescription diet brands of both dry and wet food for picky eaters to try.

“Slow is important when it comes to cats,” says Zink. “When [shelters] get a fat pet, the most important thing is to weigh them regularly to make sure they’re not losing weight too rapidly. It’s never a good idea to cut back calories too severely for any animal.”

Dogs and cats are species of opportunistic hunters and scavengers who would once have spent whole days moving in search of food, says Stemcosky.

“Having a full meal [at once] doesn’t fulfill their species’ needs,” she says, whether the pet is overweight or not. “If we do nothing [else] for animals, enrichment feeding and interactive play is the best way to see them mentally and physically in shape.”

For overweight dogs, Brorsen suggests bringing the day’s meals along on walks in a treat tote or baggie. Store-bought “licking mats,” kibble-dispensing balls and puzzle bowls are also useful tools at mealtimes, but shelter volunteers can even make puzzle feeders using toilet paper rolls, old blankets or old tennis balls for both dogs and cats (see sidebar, below). DIY food puzzles are a perfect short-term project for local businesses that want to involve employees in a “day of service,” says Stemcosky, and collecting the supplies is an easy way for schools or youth groups to get involved.

In fact, consider doing away with traditional pet food bowls entirely and turning every meal into a form of enrichment, Stemcosky says. “Food bowls for dogs and cats would always be puzzles in my perfect world. I don’t think it’s any more extra work for us humans, but that extra work for the animals really pays off in the end.”

“One step can lead to two steps can lead to three. Next thing you know, they’re going to be moving quicker.”
- Lisa Stemcosky, Humane Rescue Alliance

Although some pets are more difficult to adopt out than others and gentle humor about weighty pets can help, shelters and rescues should ensure they don’t minimize the seriousness of pet obesity, and they should send adopters home with a treatment plan and a sample of high-quality food, notes Zink. Ideally, your fat dog or cat will be going home before he’s finished his weight-loss journey, so it’s important for adopters to understand that their new pet has special needs.

Organizations should also be careful not to promote heftier pets in a way that may offend more zaftig humans, or use offensive stereotypes associated with human fat shaming—for example, joking that an animal is “lazy” or “greedy.” When HRA was ready to adopt out Symba, they shared undeniably attention-grabbing photos of staffers struggling to hold him but mentioned his weight without either celebrating or disparaging it: “HRA staff has seen a lot—but we’ve never seen a 35-lb cat!” the shelter wrote. Media interviews about “the tubby tabby,” as he became known, focused on Symba’s health, with the shelter noting that “Symba needs a home where his adopter will be diligent with an exercise and diet program that will help get this big guy to a healthy weight.” And when Symba found a home, HRA again focused on health: “Symba’s new adopters are dedicated to getting him healthy by continuing on his current diet and exercise plan, and most importantly giving him the love and care he deserves so he can thrive long term. We’ll be rooting for you Symba!”

Brorsen suggests talking to any adopter about the importance of good nutrition, portion control, playtime and, for dogs, brisk walks that go beyond simple bathroom breaks. Pet owners often project human foibles onto their overweight animals, he says; while there’s no question that animals feel emotions, it’s unreasonable for owners to claim their overweight dog or cat prefers the couch to playtime.

He acknowledges that it can be difficult for pet owners to hold back on food and treats when they’re an easy way to bond with pets, and it can be especially difficult with a newly adopted pet. “There’s always that period of [time] when you adopt a new pet, an acclimation period, where they won’t eat,” he says, and new owners feel panicked and pressured to ply them with increasingly high-value food and treats. “It just unravels from there.”

Instead, adopters should “show them love through exercise and play and quality time,” he says. “I’ve rarely ever seen a tired dog beg for food.”

In the shelter or at home, make mealtimes a (supervised) puzzle for animals’ mental and physical enrichment, suggests the Humane Rescue Alliance’s Lisa Stemcosky. 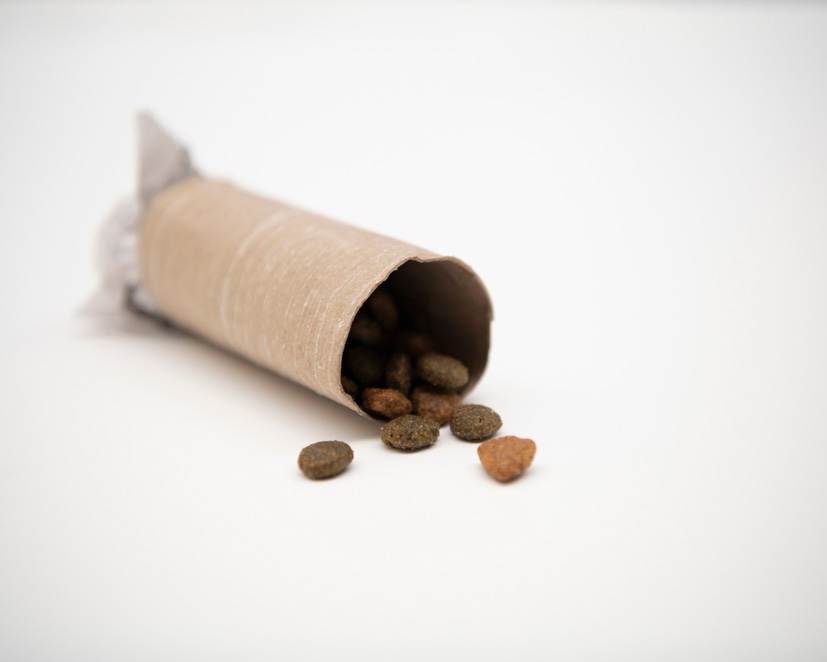 Hide and seek feeder*
Supplies: Toilet paper roll; newspaper Instructions: Stuff toilet paper roll with kibble. Close off each side with a ball of newspaper.
*adapted from frederickcatvet.com 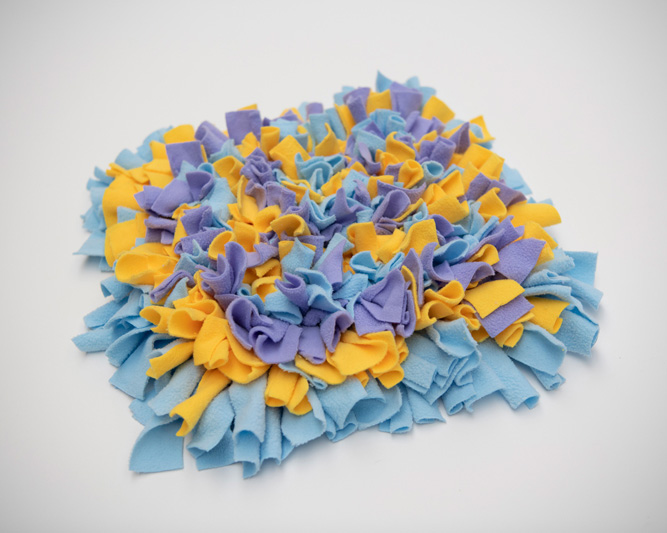 Snuffle mat**
Supplies: Rubber sink or door mat with holes; old, clean fabric; scissors Instructions: Cut fabric into strips 1-inch wide and 8- to 10-inches long. Push each fabric strip through adjacent holes in the back of the mat until the holes are filled. Flip the mat over and tie each fabric strip into a knot. Hide kibble in the mat’s folds.
**adapted from petsplusus.com 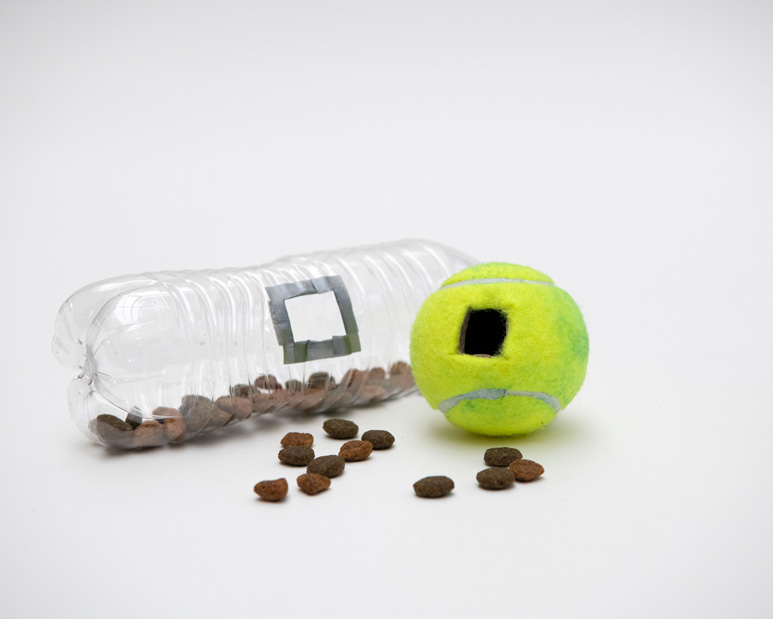 Rolling puzzle feeder*
Supplies: Old tennis ball or plastic water bottle with cap; utility knife Instructions: Cut a half-inch hole in the side of the tennis ball or water bottle. Fill with kibble or, for dogs, a mix of kibble, frozen peas or chopped apple, and a few small, high-value training treats.
*adapted from frederickcatvet.com

Bethany Wynn Adams is a senior editor at Animal Sheltering, a quarterly magazine for anyone who cares about the health and happiness of animals and their people, and animalsheltering.org. From tales of shelter mascots to guidance on backyard chickens, Bethany works with experts from across the country and within the Humane Society of the United States to bring wide-ranging, engaging print and web news to the animal welfare community. Winner of the Cat Writers' Association's MUSE Medallion and finalist in the 2019 Content Marketing World and 2018 Eddie & Ozzie Folio awards, she lives in Maryland with her husband and two naughty rescue dogs.