Can’t we all just get along?

The two leaders—one of an open-admission municipal shelter serving 2,383 square miles and 39 municipalities, and one of a large private shelter serving the same area—shared their presentation like talk show hosts, bantering and teasing one another—almost as if they were (gasp) friends.

Relations between the two shelters hadn’t always been so friendly, they admitted. But now they work hand-in-hand to meet their goal of “ending the unnecessary euthanasia of all adoptable animals in Palm Beach County by 2024,” a countywide resolution known as Countdown 2 Zero that they jointly crafted and passed through the Board of County Commissioners in 2014.

(Four years later, Animal Care and Control has already improved its dog save rate from 71 to 87 percent and its cat save rate from 21 to 65 percent. “We want it to go higher, of course, but we deal with every cruelty case in the county, the neglect cases, whatever is going on law enforcement-wise,” says Suave, adding that she is “really thrilled” with the overall increase in the shelter’s save rate.)

Their presentation was one of the last sessions of the conference, but when it was time for a Q&A, attendees clamored to take ownership of the microphone. They expressed surprise in the scene before them, describing the fraught relationships between animal organizations in their own communities. They talked about rescue groups that transported in “fluffy white things,” who they felt were competing with existing dogs in the area, and shelters that refused help from outside groups. But Suave and Anderson gave them hope.

“It’s like a marriage, it really is,” says Suave. “Where divorce is not an option.”

When Suave and Anderson initially proposed Countdown 2 Zero, around 29 percent of dogs and 80 percent of cats entering Animal Care and Control were euthanized.

Yet before Anderson took over as shelter director in 2011, Peggy Adams had primarily transported in and adopted out puppies and small dogs from Southern states. Combined with the fact that Animal Care and Control was required to take in every animal—stray, surrender or otherwise—and that Peggy Adams could pick and choose, there was—to say the least—some contention between the two shelters.

“The two largest animal organizations were really working on their own and really not working together to solve the local problem,” says Anderson, who quickly learned that the shelters’ rocky relationship went back decades. “Separately, we were going in circles and not going anywhere.”

Once the two directors met and hit it off, Peggy Adams started to significantly limit the number of animals it was bringing in from outside the community, he says. The private shelter decided to “strictly focus on community needs, first and foremost pulling as many animals from the county shelter as we could,” including those who need extensive medical care, larger dogs, strays during their holding periods, cats and even kittens as space allowed. In 2017, Peggy Adams pulled over 1,100 dogs and cats from Animal Care and Control, some of whom went up for adoption at the shelters’ joint, annual mega- adoption event.

Although Countdown 2 Zero was the brainchild of Suave and Anderson, the resolution doesn’t just cover the two largest shelters; it also laid the groundwork for a community coalition. Peggy Adams pulls the largest number of animals from the county shelter, but hundreds of rescues across Palm Beach County pull and place animals; one local nonprofit even offers rescues a stipend for each at-risk dog they take in. In fact, the group that pulls the second-largest number of animals from the county is an “absolutely tiny little rescue group,” says Suave. “I find that pretty fascinating.”

It’s all hands on deck to meet community goals, agrees Anderson. “One of the neat things that happened with Countdown 2 Zero is we were able to engage the cat trapping community,” he explains, as the county obtained funding that enabled both shelters to offer free spay/neuter in high-intake areas. Then it was just a matter of pinpointing the largest cat colonies and asking local trappers for help. “That’s worked very, very well,” he says.

Palm Beach County Animal Care and Control and Peggy Adams Animal Rescue League aren’t alone in their partnership. Some shelters serving the same area, like the Washington Animal Rescue League and the Washington Humane Society in D.C., and Asheville Humane Society and Animal Compassion Network in North Carolina, have merged to form one large organization—the Humane Rescue Alliance and Asheville Humane Society 2.0, respectively. In other communities, private and public nonprofits are collaborating on trap-neuter-return, outreach initiatives and adoption events. 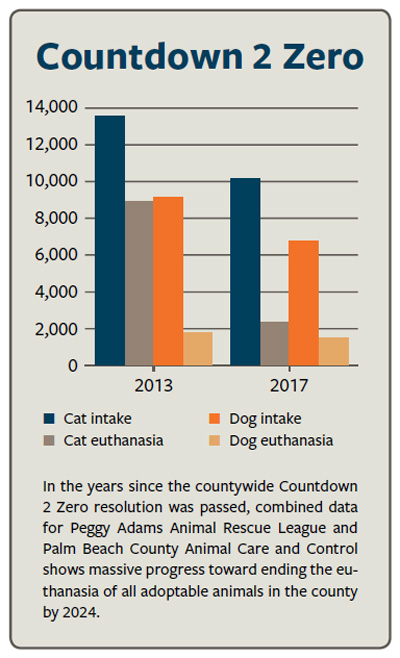 Some groups have chosen to formalize and name their relationship: The Animal Shelter Alliance of Portland, for instance, is made up of 10 area organizations. But the most important aspect of a community partnership in any form, says Suave, is the uniform recording and transparent sharing of intake, outcome and live-release data.

Suave’s high opinion of data sharing is itself backed by data: A 2013 study of six communities participating in the ASPCA’s Partnership Program showed that when partners were trained in data collection and analysis, as well as programs that “were best suited to the community needs, as identified from shelter statistics,” live-release rates in those communities improved by an average of 62 percent within five years.

To qualify for the study, each partnership had to include enough participating organizations to make up at least 80 percent of the total shelter intake for that city or county; all of the partnerships included municipal animal control agencies. Partners received monthly status reports from individual organizations and the community as a whole, including trend analyses that identified animal groups (e.g., adult cats during kitten season) at high risk for euthanasia each quarter.

“Collaboration among all of the diverse entities (not-for-profit shelters, municipal animal control shelters and nonsheltered community-based rescue groups) that typically work within any community setting is … essential to obtain an accurate picture of homeless animal numbers and outcomes,” wrote the study’s authors, noting that one of the first such programs began in 1994, when the San Francisco SPCA and San Francisco Department of Animal Care and Control partnered, modified policies and quickly increased the city’s live-release rate.

In Palm Beach County, about 60 area organizations submit data to Animal Care and Control each month. When Countdown 2 Zero was first formed, groups agreed to voluntarily hand over the numbers—but after two years of spotty participation, the county commission passed an ordinance requiring it. The passage of the ordinance wasn’t popular, says Suave, but “I promised them all that they will thank me down the road.”

With those numbers at hand, Animal Care and Control and Peggy Adams have been able to change county ordinances to allow for return-to-field programs; get a handle on the number of animals coming and going via transport; identify potential animal hoarders; and jointly apply for grant funding, which they used to target areas of highest intake with TNR for community cats, as well as spay/neuter and intake prevention programs for owned pets.

“When people are giving money away, they’re not going to give you money just because you’re doing good work,” says Suave. “Good work needs to be supported by collaborative efforts. When you’ve got two large groups working together collaboratively and with data, it’s a winning combination.”

Bethany Wynn Adams is a senior editor at Animal Sheltering, a quarterly magazine for anyone who cares about the health and happiness of animals and their people, and animalsheltering.org. From tales of shelter mascots to guidance on backyard chickens, Bethany works with experts from across the country and within the Humane Society of the United States to bring wide-ranging, engaging print and web news to the animal welfare community. Winner of the Cat Writers' Association's MUSE Medallion and finalist in the 2019 Content Marketing World and 2018 Eddie & Ozzie Folio awards, she lives in Maryland with her husband and two naughty rescue dogs.