Helping hands across the island

In a huge collaborative effort, an HSUS-led coalition brings veterinary services to the pets of Puerto Rico

They started arriving the night before, determined to be among the first in line when the doors opened in the morning. With their dogs by their sides and cats cozied in carriers on their laps, families settled in, waiting for the sun to rise on the latest stage of Spayathon™ for Puerto Rico—the largest known spay/neuter collaboration in the world.

Led by the Humane Society of the United States, a coalition of more than two dozen organizations has sterilized and vaccinated nearly 25,000 animals since the initiative began last summer—and they’re not done yet. With the support of Governor Ricardo Rosselló and the first lady, Beatriz Rosselló, the initiative will most likely exceed a total of 30,000 pets by the time it wraps in May.

Spayathon for Puerto Rico was recently acknowledged by the Clinton Global Initiative’s “Commitment to Action,” which recognizes efforts to address significant global challenges with methods that are innovative, specific and measurable. Spayathon is one of less than a dozen animal welfare-related efforts to receive this recognition since the initiative began in 2005.

To make it happen, expert teams of veterinary staff, animal welfare advocates and volunteers set up clinics in sports arenas and other large spaces across the island. Over the course of several days, the teams spay or neuter and vaccinate hundreds of pets and send their families home with pet food, leashes, toys and other supplies. All services are provided free to the pets’ owners. The program includes training for local veterinarians, and all equipment and supplies will be left behind to equip the island’s first permanent high-quality, high-volume spay/neuter clinics, ensuring the work continues long-term.

“This is the first time high-quality, high-volume spay/neuter of this magnitude has ever been done anywhere in the world,” says Tara Loller, HSUS senior director of strategic campaigns for companion animals, who spearheaded the project. “I am extremely proud of this work—it’s truly been a dream of mine since I stepped foot on Puerto Rico in 2014.”

To carefully and quickly sterilize hundreds of animals each day, the teams follow strict safety protocols and meticulously devised procedures, including veterinary examinations upon intake to determine the animals’ eligibility for surgery, state-of-the-art anesthesia protocols including individual pain management plans, and the use of commercial autoclaves to ensure that instruments are properly sterilized. While each clinic wants to serve as many animals as possible, “quantity never trumps quality,” says Lindsay Hamrick, HSUS director of public policy for companion animals, who worked as a team leader during the first two rounds of the Spayathon (the third round was in early February, and the final round will be in May).

Volunteers at each clinic ensure that animals have enough safe space between them in line and throughout the registration process, and they provide water for people and pets. Families stay with their pets through the veterinary examinations, not leaving their side until they’re nodding off from the sedative, and reuniting with them as soon as they start waking up from surgery.

“We make sure the families are with their pets as much as possible,” says Kari Nienstedt, HSUS senior director of council engagement and a Spayathon team leader. “It’s less stressful on the people and the animals, which makes it safer for everybody. The last thing the animals remember and first thing they notice when coming out of surgery is that they’re with their family, which is great.”

After a veterinarian evaluates the animals and gives the green light for them to go home, families receive a rabies vaccination certificate, pet supplies, recovery instructions and access to follow-up care in case they have any medical concerns after the clinic closes.

The hours are long—with staff arriving before 6 a.m. and not locking up until well after 9 p.m.—but the rewards are many.

“We know what this means in terms of how many animals we’re helping now and how many litters that’s preventing in the future,” Nienstedt says. “There certainly are challenges, but the cohesion and collaboration among the partners is unbelievable. We’re all on the same team with the same goal.”

“To say that the scope of the project is unprecedented would be a profound understatement. This required identification and recruitment of topperforming surgical teams, standardization of medical protocols, importation of hundreds of pallets of equipment needed to elevate the level of surgical care, and integration of local ground teams. The seamless coordination of medical teams, governmental agencies, funders and nongovernmental organizations, many of which had never worked effectively together in the past, and all in the context of challenging physical conditions and language barriers, has been remarkable.”
- Dr. Julie Levy, veterinarian and professor, Maddie's Shelter Medicine program at the University of Florida

Ask Loller, Hamrick or Nienstedt which encounter has had the most impact on them, and the answer is the same: There are too many to list. The elderly man who strapped his cat’s carrier to his bicycle and rode 20 miles to the nearest clinic. The woman who waited all night at the front of the line and, instead of resting while her dog was in surgery, picked up a broom and started helping the staff clean. The woman who bedazzled her cats’ cardboard carrier so they’d travel in style. The man who came back every day after his pet’s surgery to help translate at the registration table. The man who spontaneously broke into a speech of gratitude in the waiting area, drawing cheers and applause from the 100 or so people nearby.

Every day, at each of the eight locations, there were lines around the building full of people who had gone to extraordinary lengths—traveling long distances, missing work, forgoing repairs to homes still damaged from the hurricanes—to make sure their animals got the care they deserved, Nienstedt says.

“Every single one cared enough about their animal to spend a significant amount of time waiting in line—without exception, every person who came through the door,” she says. “How loved these animals are.”

Here are some of their stories: 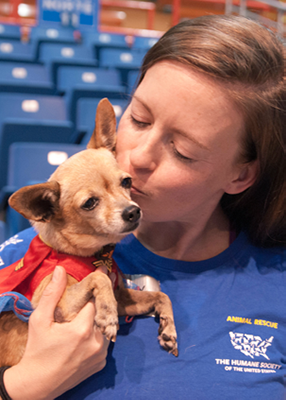 On the third night of the clinic Hamrick was leading, a man came in with a Chihuahua he had found on the street. He couldn’t keep her, but he wanted to make sure she was in good hands. The beige Chihuahua was about 7, older than many of the dogs who came through the doors, earning her the name Grandma Baguette. Hamrick was smitten. She has two dogs and a cat of her own and was already fostering a hospice dog, but she couldn’t resist Grandma’s sweet, snuggly nature and brought her back to the mainland. The little dog loves to burrow under Hamrick’s covers at night and, thanks to a stranger’s kindness and Spayathon, Grandma now has the family she deserves. 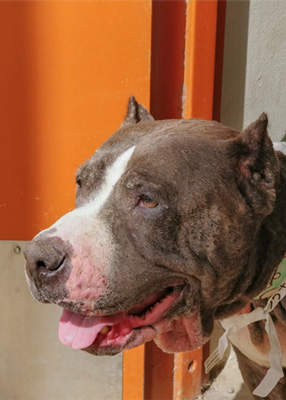 When Jose Luis Rodriguez found Fiona in the fall, she was malnourished and had mange. He brought her home, giving her a safe, warm place to sleep and good food to eat. He knew she needed to be spayed, but he could only afford to treat her skin condition. Then he learned about Spayathon. He and Fiona lined up at 2 a.m. the morning of the event so she could secure a spot. Fiona is his first pet as an adult, Rodriguez says, and he wants to do right by her. “The Spayathon gives me the opportunity to provide her with a healthier and better life.” 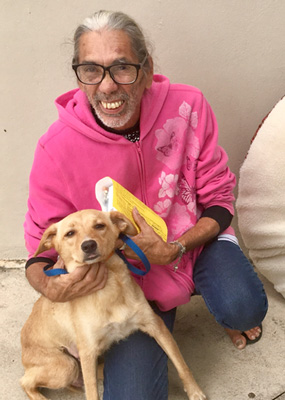 Milagros had been scavenging for food on the streets when Luis Rosario found her in the fall. She was thin and appeared to have recently had puppies. He took her in and started looking for a way to get her spayed. He heard about the Spayathon and camped out the night before to ensure she got in. After her surgery, volunteers gave her a new dog bed, pet food and a bag full of toys. Rosario called the day “a home run.” He’s happy that Milagros no longer has to hunt for food or struggle to care for puppies. “Now,” he says, “she just gets to be my companion.” 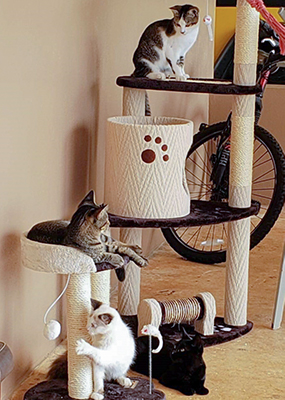 Mary Ann Lopez was grateful to have five of the community cats she cares for sterilized during Spayathon. She even went home with a free cat tower for her feline friends to enjoy. She built them an enclosure off the back of her house to help protect them and local wildlife, and now their cozy digs are an even better place to play, climb and snooze.

Emily Smith is the deputy editorial director of All Animals magazine, the member magazine of The Humane Society of the United States.